For the first time in three years Alnwick Town Council hosted their Mayor’s Civic Awards ceremony which recognized residents who have helped their fellow citizens.

Town Mayor, Cllr Lynda Wearn, said “The people receiving the awards this evening have and do make an enormous difference to many people and to Alnwick itself.  Although their awards are for a range of reasons they all share a common thread – they have all ‘gone the extra mile’ for Alnwick and its residents.”

“This is my last event as Mayor as my year of office finishes on Thursday evening, and, although I’ve been Mayor for three years this is the first time, due to Covid, that I am able to present Civic Awards.” 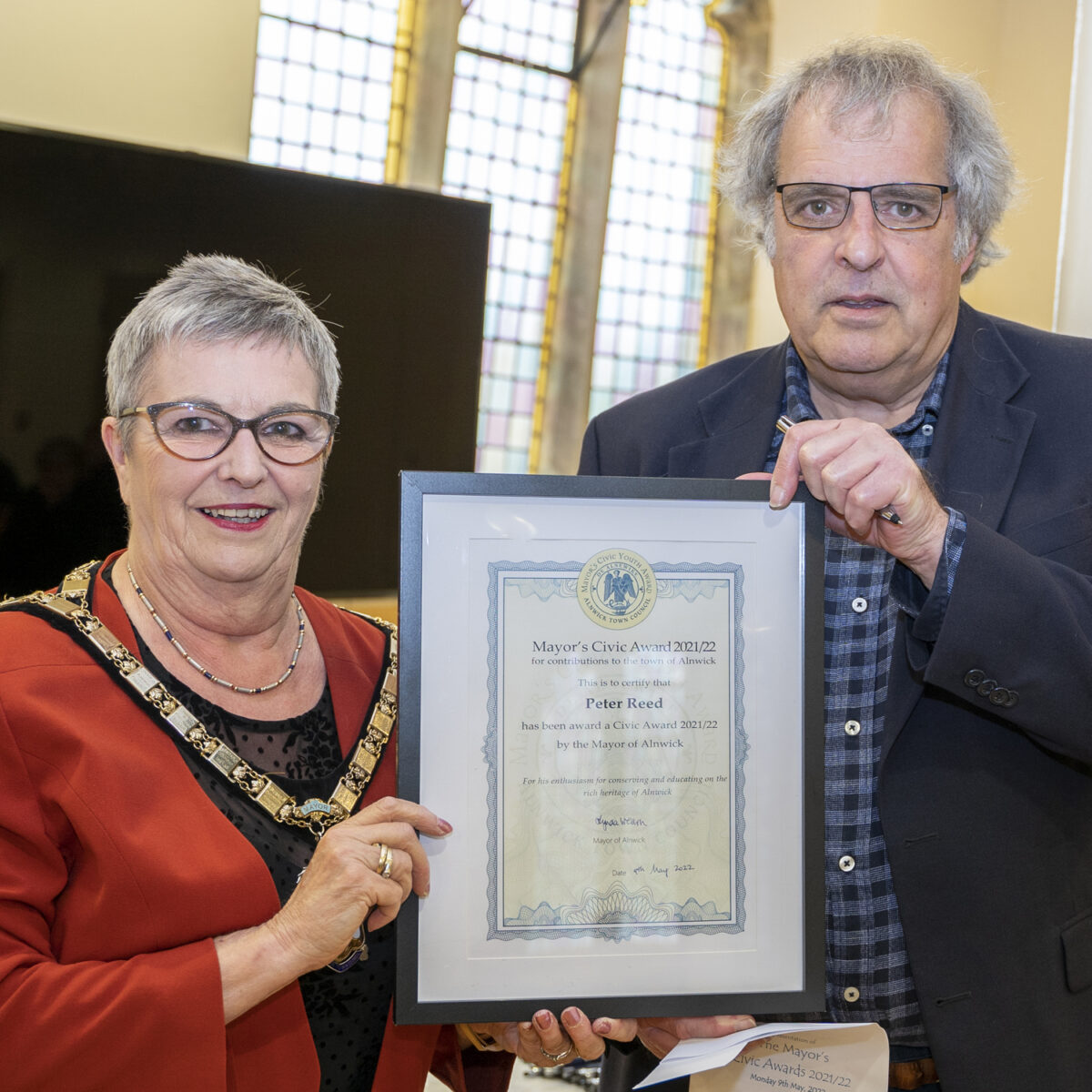 (Above) For his enthusiasm for conserving and educating on the rich heritage of Alnwick Peter Reed, Chairman of Alnwick Civic Society, was the first to be presented with a Civic Award. 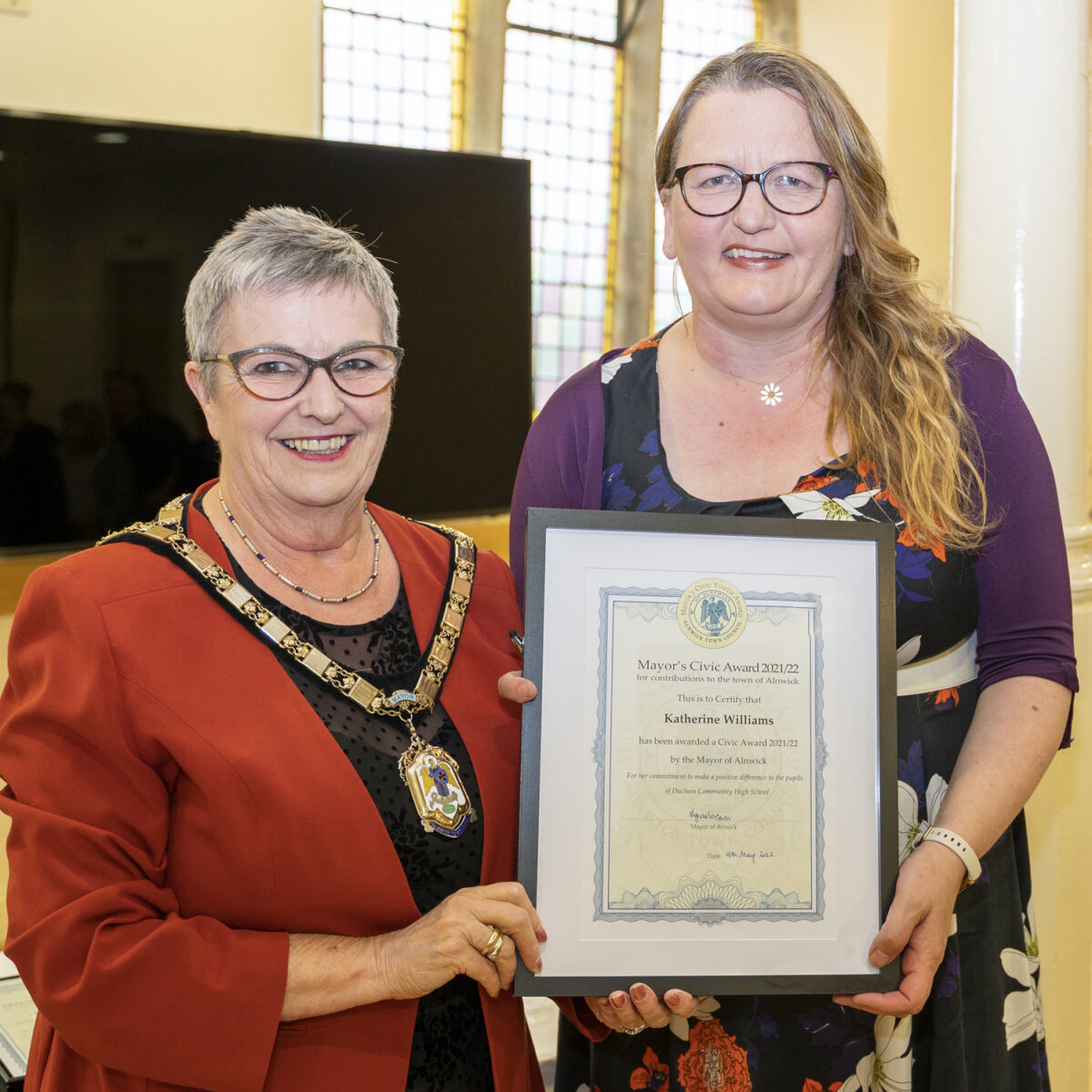 Katherine Williams, Volunteer Chair Trustee of the Duchess Community High School Trust, received her award because of her commitment to make a positive difference to the pupils of the school. 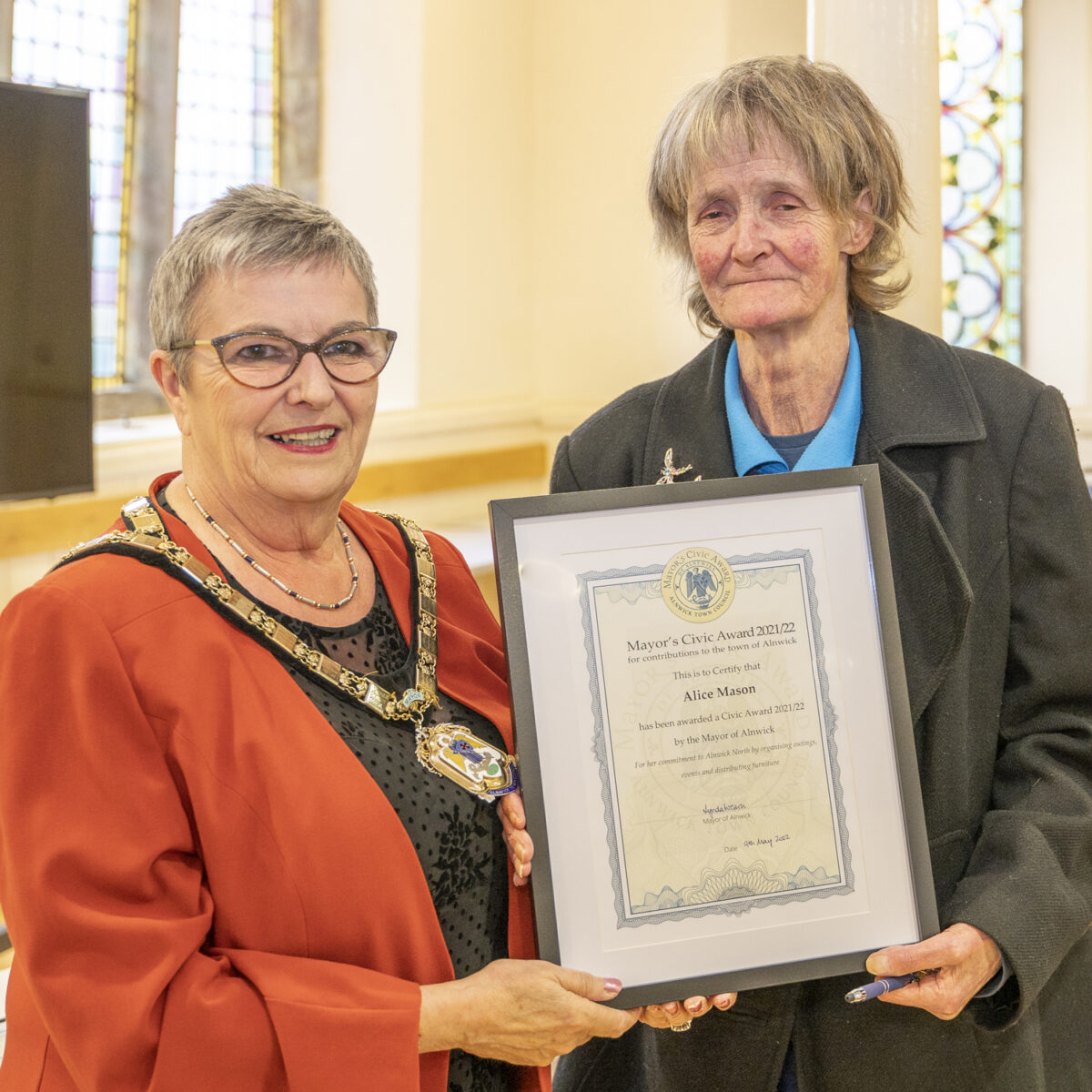 Next to be presented with an award was volunteer Alice Mason who has been an inspiring figure within the Barresdale Community and the whole of Alnwick for many years.

Louise Donaldson is one of the leaders of Northumbria Army Cadets Alnwick Detachment and for her continued leadership and for being a positive role model she received a Civic Award. 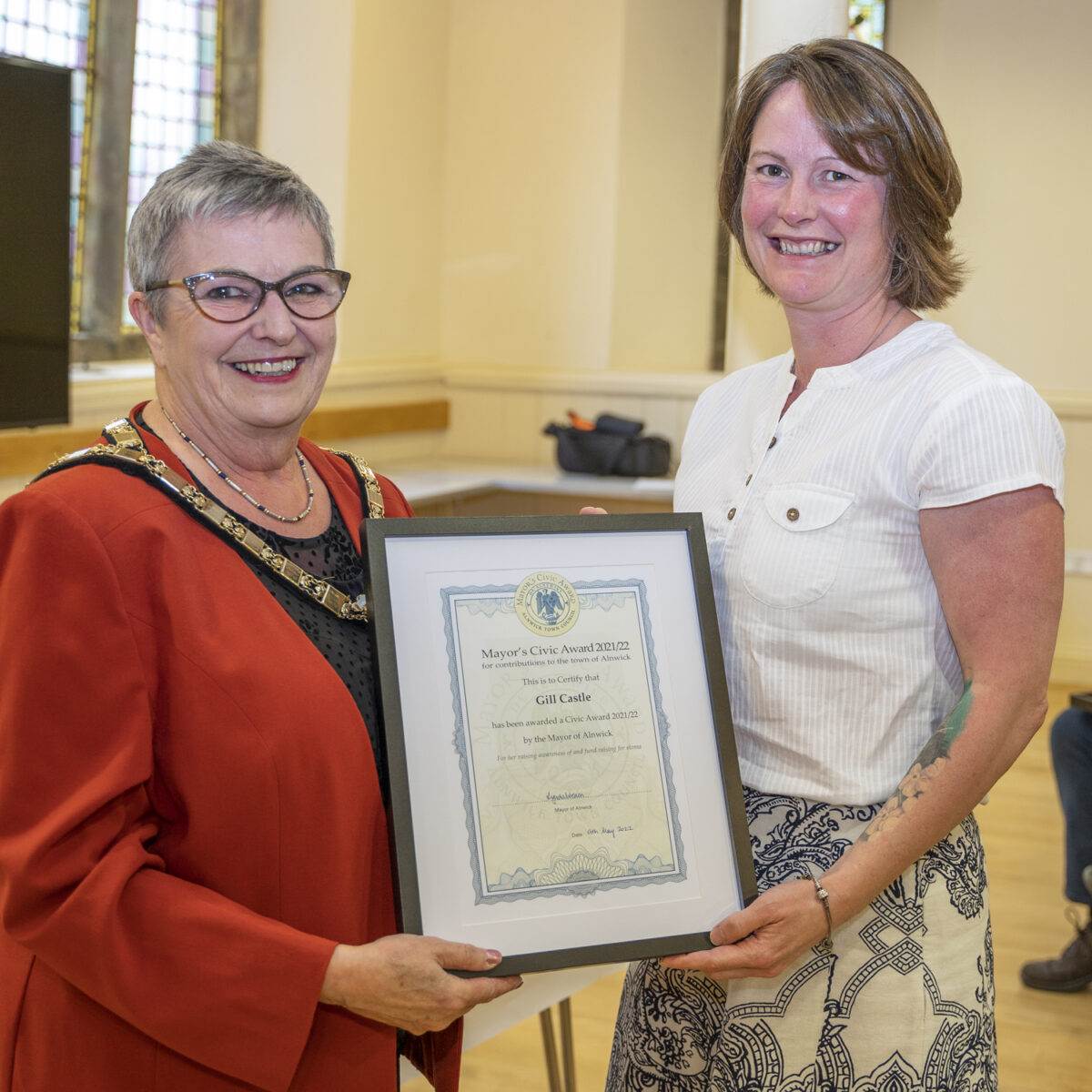 Cllr Wearn said the next recipient, Gill Castle, was truly inspirational as she has turned a negative into a positive and raises awareness of birth trauma, stoma and life as a “can do” person.

Tom Deedigan is currently President of Alnwick Lions Club and always part of everything they do so for his support of Alnwick and its community he was presented with a Civic Award. 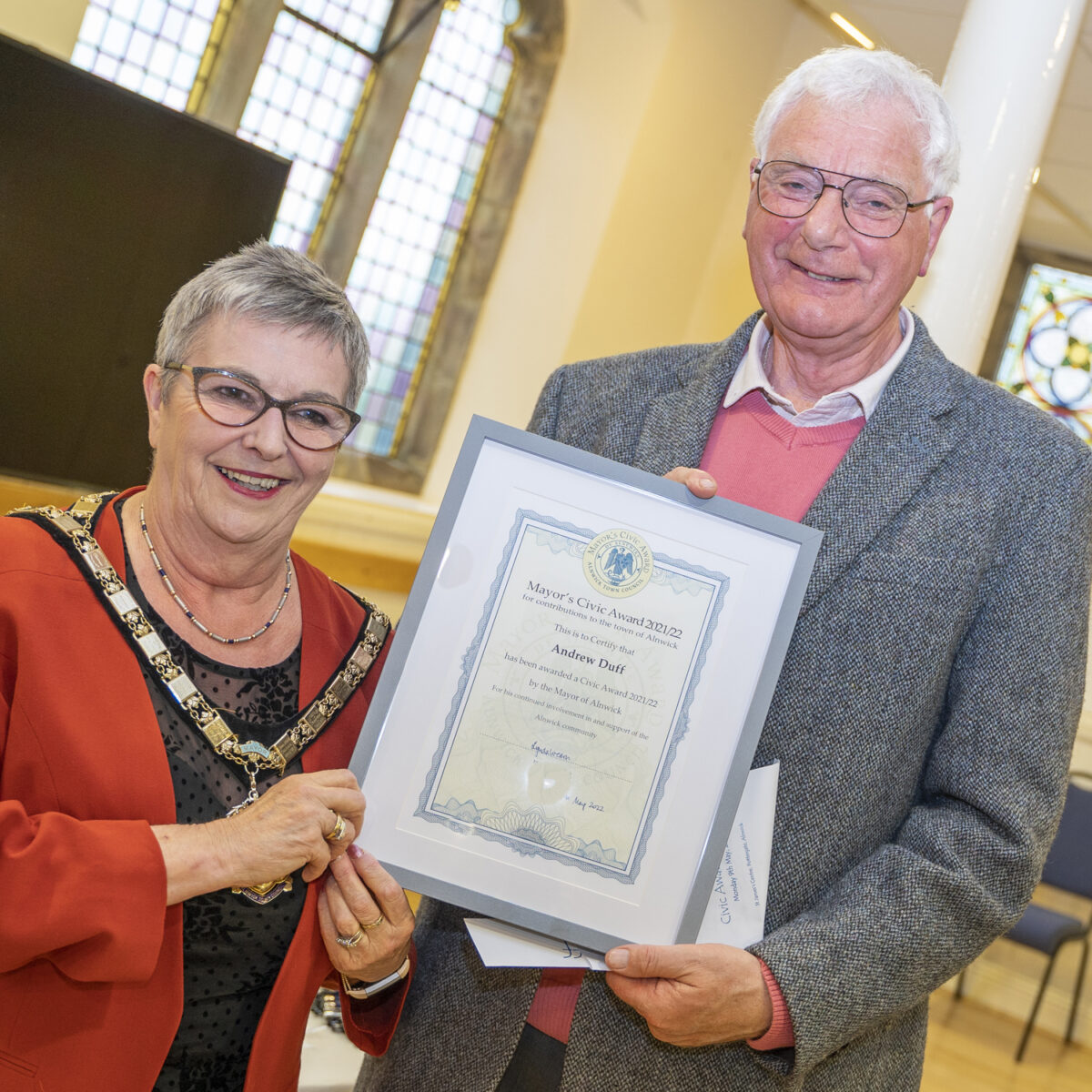 Andrew Duff is well known for his contribution to the music scene in the town, and has set up a support group for the expected refugees from Ukraine. Andrew’s Civic Award was collected on his behalf by Henry Playle.

The next award went to Jo Potts who served with distinction as the CEO of Alnwick Playhouse from 2011 to 2022 and left a legacy that is truly a jewel in Alnwick’s crown. Jo was unable to attend the presentation ceremony. 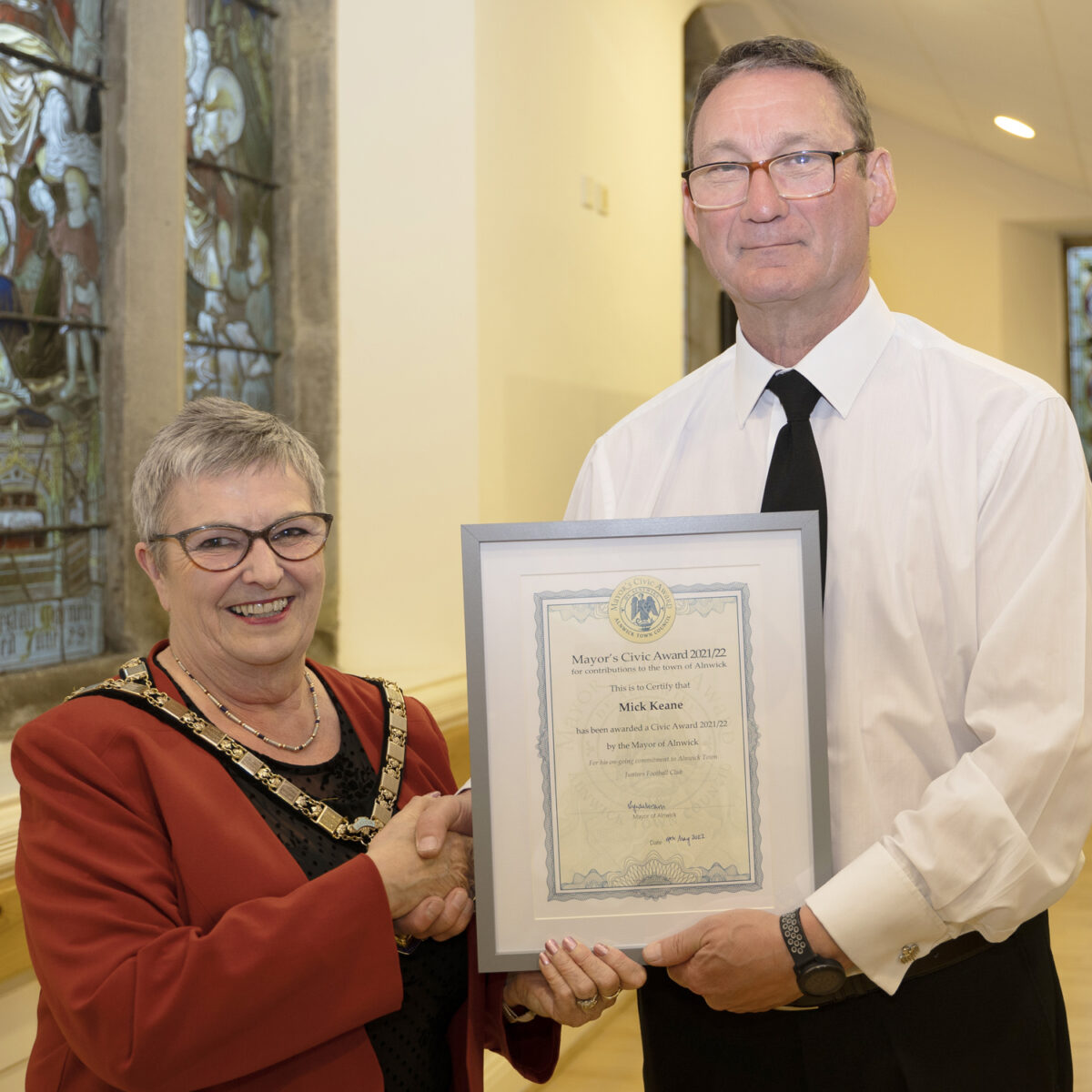 The next recipient, Mick Keane, is secretary of Alnwick Town Juniors Football Club and his leadership qualities came to the fore following Storm Arwen when the club had to rebuild again.

For his service to St Michael’s Church and his commitment to the wider community of Alnwick, Rev Paul Scott also received a Civic Award. 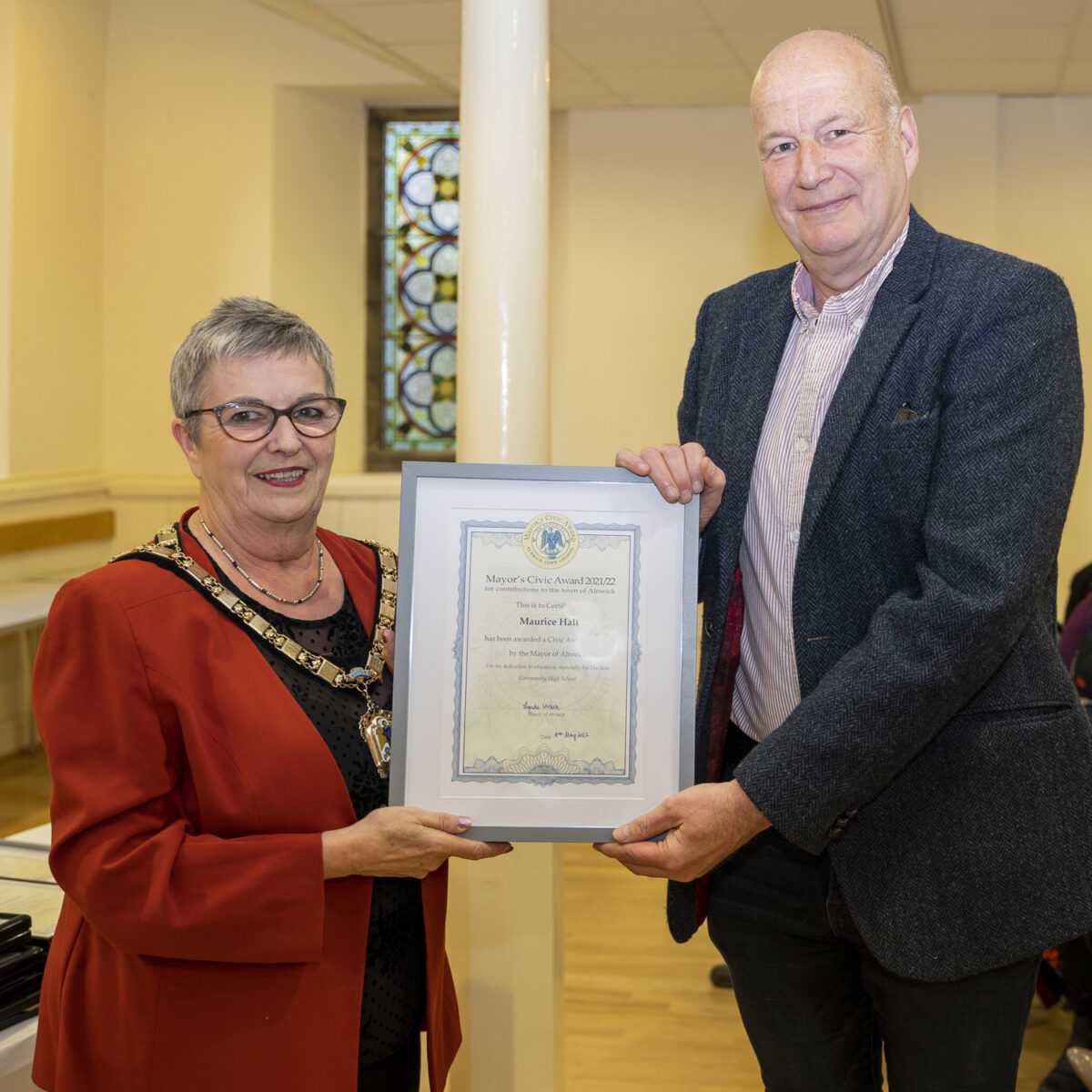 Maurice Hall retired last year, after 17 years as headteacher at the Duchess High School.  Alnwick born and bred, his dedication to education resulted in him being presented with a Civic Award.

Bill Grisdale has been an active member of Alnwick community for many years, servicing as a councillor, school governor and trustee of key organisations in the town and for his continuing support of the Alnwick Community and its people, he received a Civic Award. Bill was unable to attend the presentation ceremony.

The next award went to Trevor Jones who made a real impact in the 12 years he spent as Head Gardener at Alnwick Garden. For his infectious dedication to horticulture he was presented with a Civic Award. Trevor’s award was collected on his behalf by Mark Brassell of Alnwick Garden.

The next batch of awards went to individuals for their help and support during the Covid pandemic.

The first went to Chris Davies, chemist at Boots, who contacted the Town Council at the start of pandemic asking if they would like to work together to find a way to ensure people did not have to wait in very long queues at a time when many felt very vulnerable and for this pro-active approach to keeping people safe during the Covid pandemic, he received a Civic Award.

The next 4 awards went to the Prescription Team – the key people involved in the Town Council’s prescription delivery service which picked up and delivered almost 1,500 prescriptions from Boots and Well pharmacies via a ‘back door’ system.

The next award went to Martin Russell who aside from running The Oaks Hotel in Alnwick, was very proactive in organizing the collection of goods for the people of Ukraine.  Martin was unable to attend the ceremony.

The last individual recipient was Jackie McDougall – not only a fantastic landlady at the Blue Bell, she is the epitome of community spirit. Very much an unsung hero in the town, a deserving winner of a Civic Award. Jackie was unable to attend the ceremony. 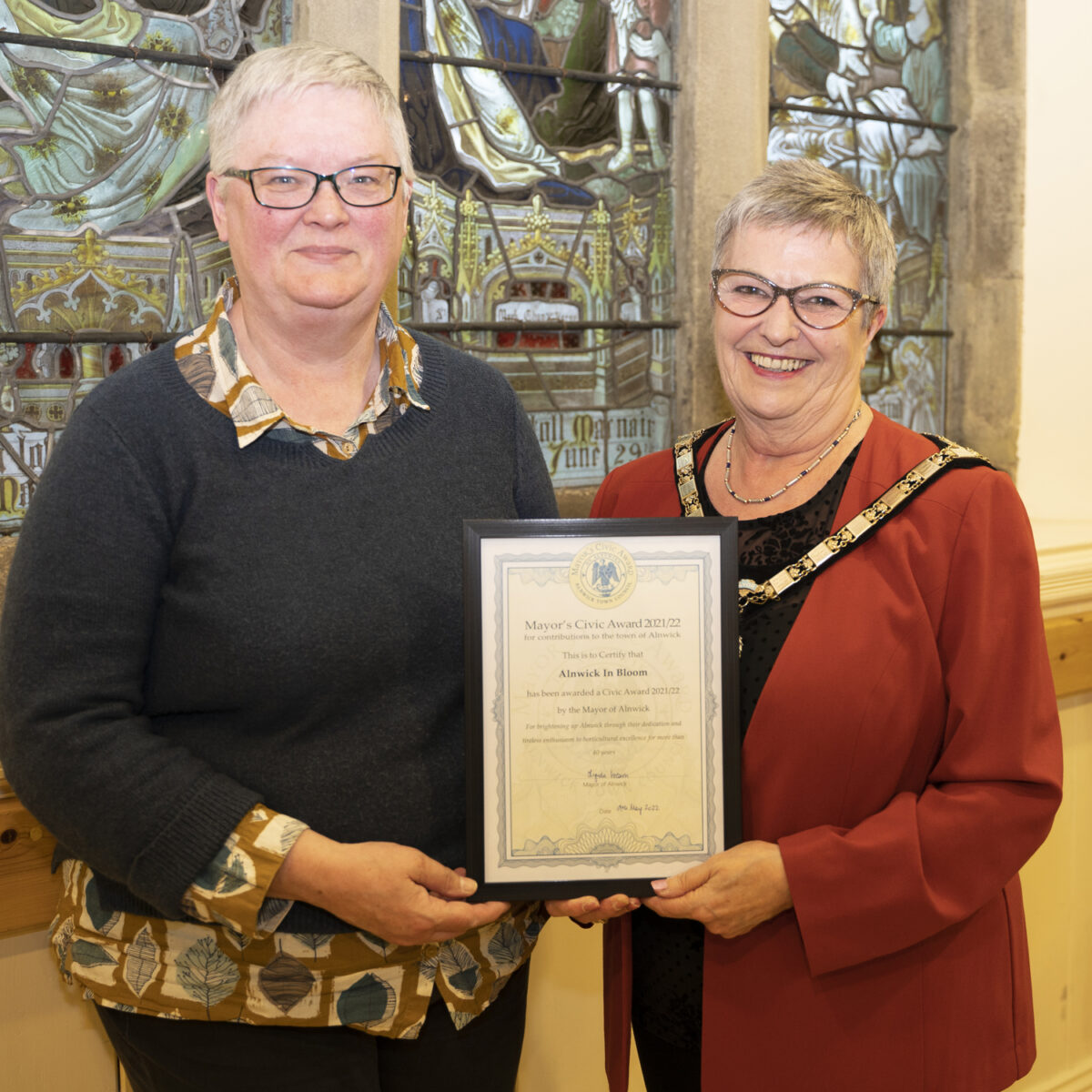 Although she organised the Civic Awards ceremony, Alnwick Town Council Deputy Clerk Janet Pibworth was unaware that she too was a recipient of a Civic Award. Much to her surprise Janet heard that for going above and beyond with her commitment to the town in many ways, including her work with Alnwick in Bloom, she was a worthy recipient of an award.

The first team award went to Alnwick & District Food Bank which serves the community from Coquetdale in the west to the Coast in the east with a completely volunteer-led team seeking to meet the essential food needs of disadvantaged individuals and families. Their work continues and they were thanked for their support of the town.

North East Equality & Diversity (NEED) was formed in 2002 and their main aims is the provision of accessible affordable transport to those most vulnerable in the community including disabled and isolated residents. For supporting the local community and helping Alnwick Food Bank deliver vital supplies during the Covid pandemic the NEED volunteer drivers received a Civic Award. They were unable to attend the ceremony.

The next team award went to Community@NE66 who were founded in January 2017 to empower and support individuals considered vulnerable and disadvantaged. Based at the Alnwick Community Centre they offer a range of projects for young people they provide much needed support for local families. 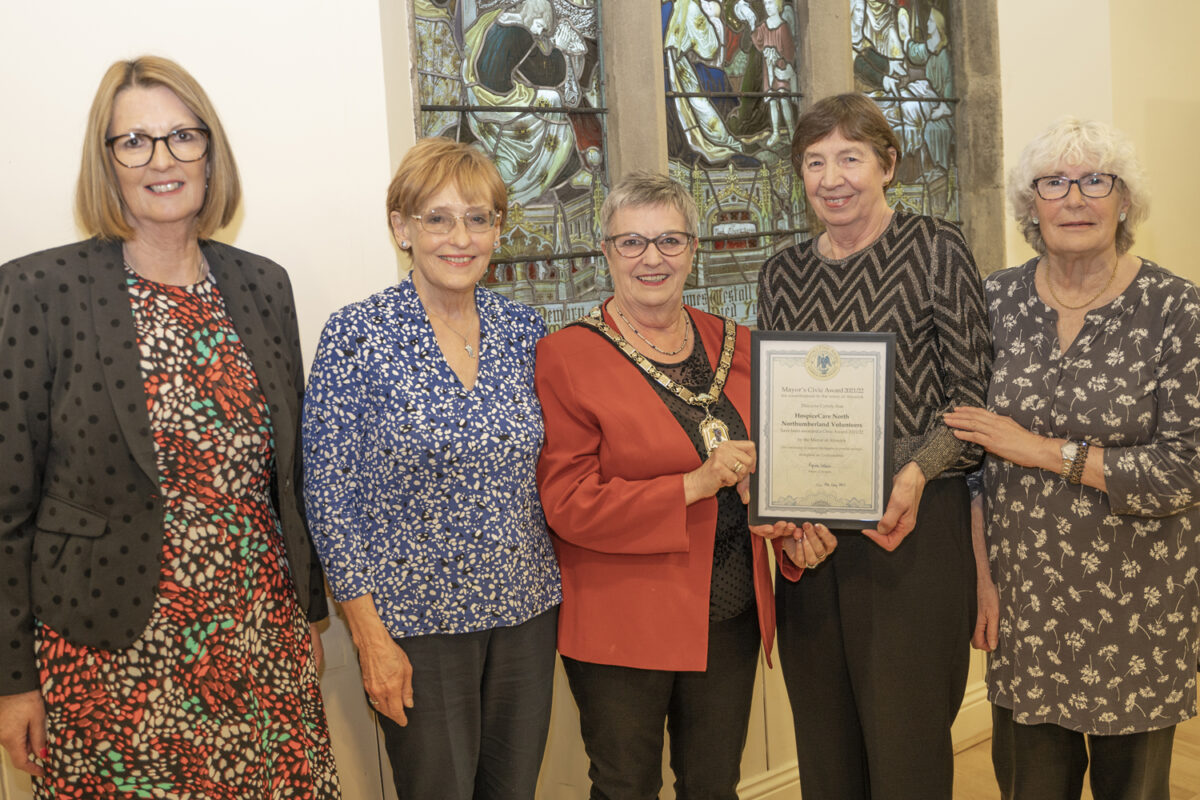 Throughout the challenges of the last two years, the team of volunteers from HospiceCare North Northumberland have been incredible in their dedication and support to the local community.  As a local independent palliative care charity, HospiceCare could not exist without support from their wonderful local volunteers.For continuing to support the hospice to provide services throughout the Covid pandemic, HospiceCare North Northumberland volunteers were presented with a Civic Award. 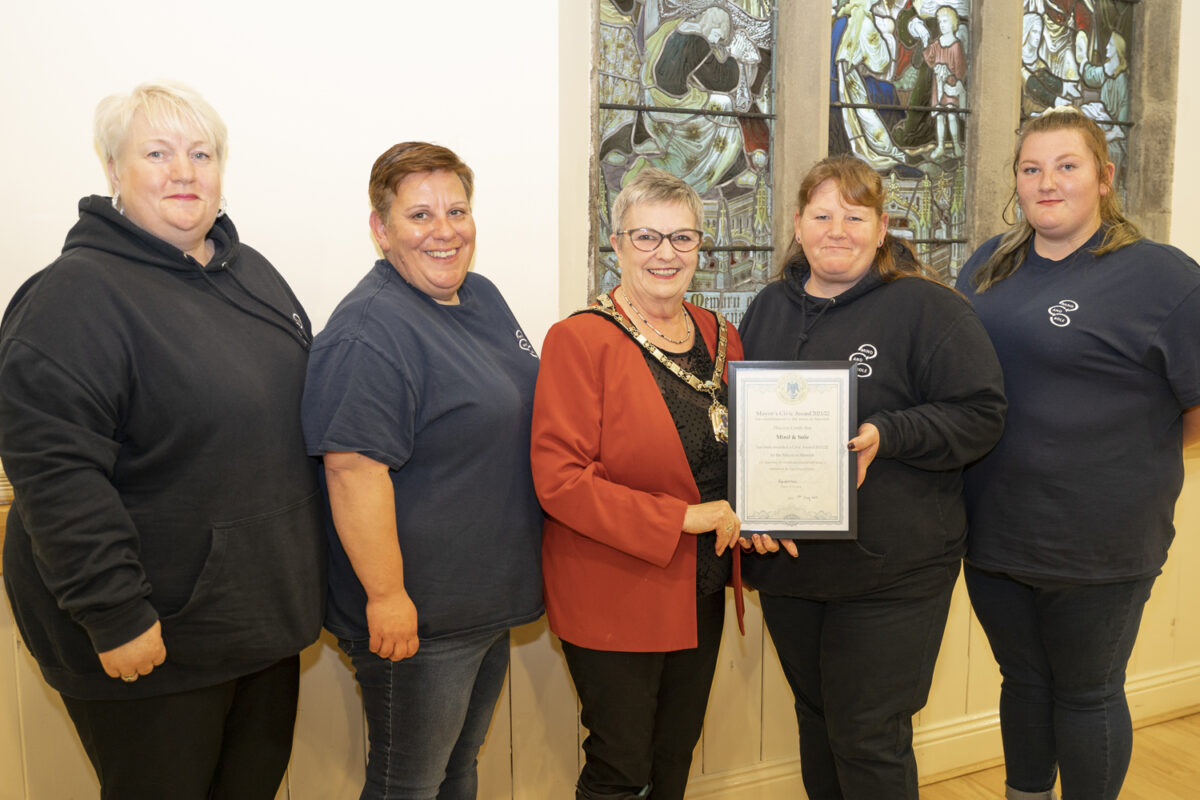 Mind and Sole was set up to help people experiencing mental health issues but the group goes well beyond that.  Not only mental well-being but also physical well-being is catered for and over 300 people have been supported so far through the group. You are doing an amazing job and for improving the mental and physical well-being of individuals by organising activities Mind & Sole received a Civic Award. 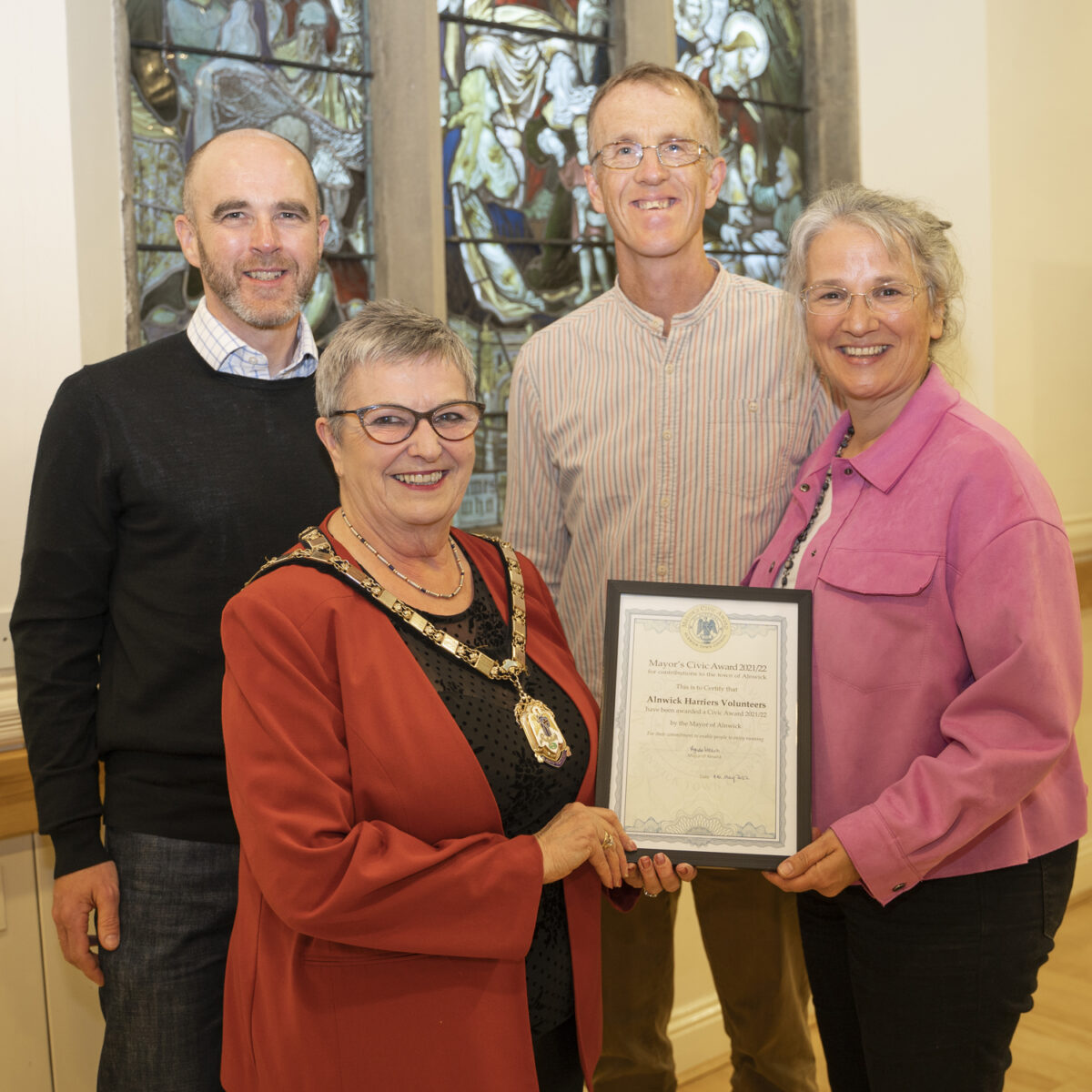 Alnwick Harriers provide local people with the opportunity to enjoy running regardless of age or ability and backed by a fantastic group of volunteers the club has grown and now has over 150 senior members. The volunteers also organise the Les Alcorn 10k in May and the Coastal run in July both of which attract huge interest. For their commitment to enabling people to enjoy running, Alnwick Harriers volunteers received a Civic Award. 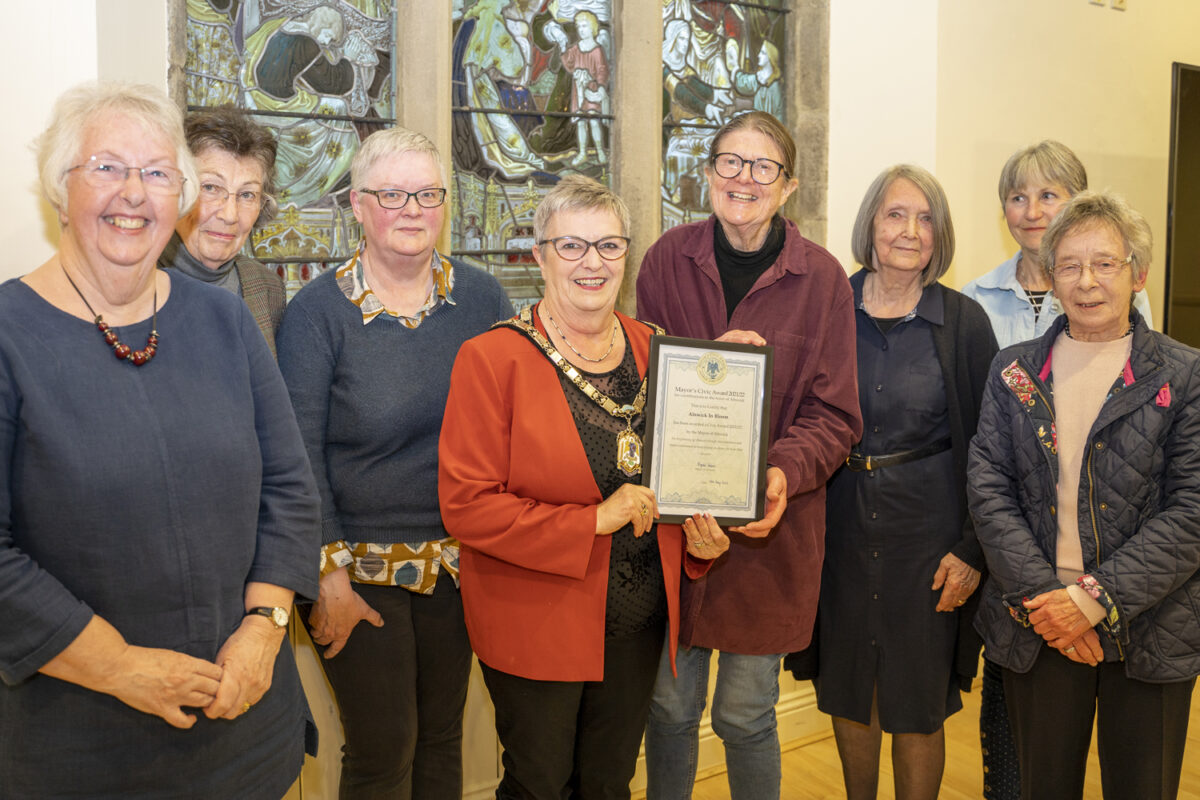 Alnwick in Bloom brighten up the town with their involvement in the floral displays and hanging baskets. They liaise with the Town Council and NCC about planting themes and colours and organise hanging baskets for businesses in the town to ensure that the town always looks its best for the Northumbria In Bloom judges. And with 10 golds in the bag, here’s hoping that 2022 brings an 11th. For brightening up Alnwick through their dedication and tireless enthusiasm to horticultural excellence for more than 40 years.